Get Started with a  Free Water Consultation
Water Basics

What is in Tap Water? 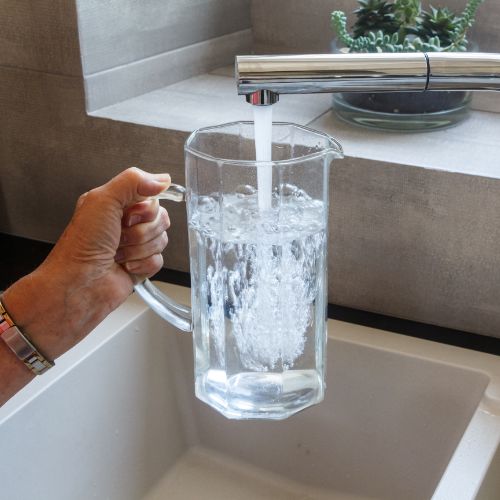 What is in Tap Water?

Picture this: It’s a glowing summer afternoon, and you’ve spent the whole day outside with your kids or pets. Now, all you want to do is get everyone a cool drink of water. You reach for the tap — but you wonder. What’s really in your tap water? Is there anything you wouldn’t want you or your loved ones to be consuming?

North America typically has high-quality tap water that is safe to drink, but that doesn’t necessarily mean it is free of contaminants, nor that it tastes crisp and clean.*

Because a variety of factors can affect your tap water’s taste and quality, it’s important to understand the ins and outs of tap water, where it comes from, how it’s treated and your options for improving your home’s water quality.

What Is Tap Water, Anyway?

The story of your tap water starts long before you reach for a glass. To understand water quality and how to enhance it for your home, you need to start from the beginning. Let’s take a look:

Where Does Tap Water Come From?

Tap water generally comes from one of two sources: surface water or groundwater.

Is All Tap Water Treated?

Untreated water isn’t necessarily clean or safe. Consider what surface water is exposed to: plant life, animal waste and chemicals like those found in sunscreen. Groundwater, meanwhile, comes into contact with sand, dirt and silt as it moves through the earth. 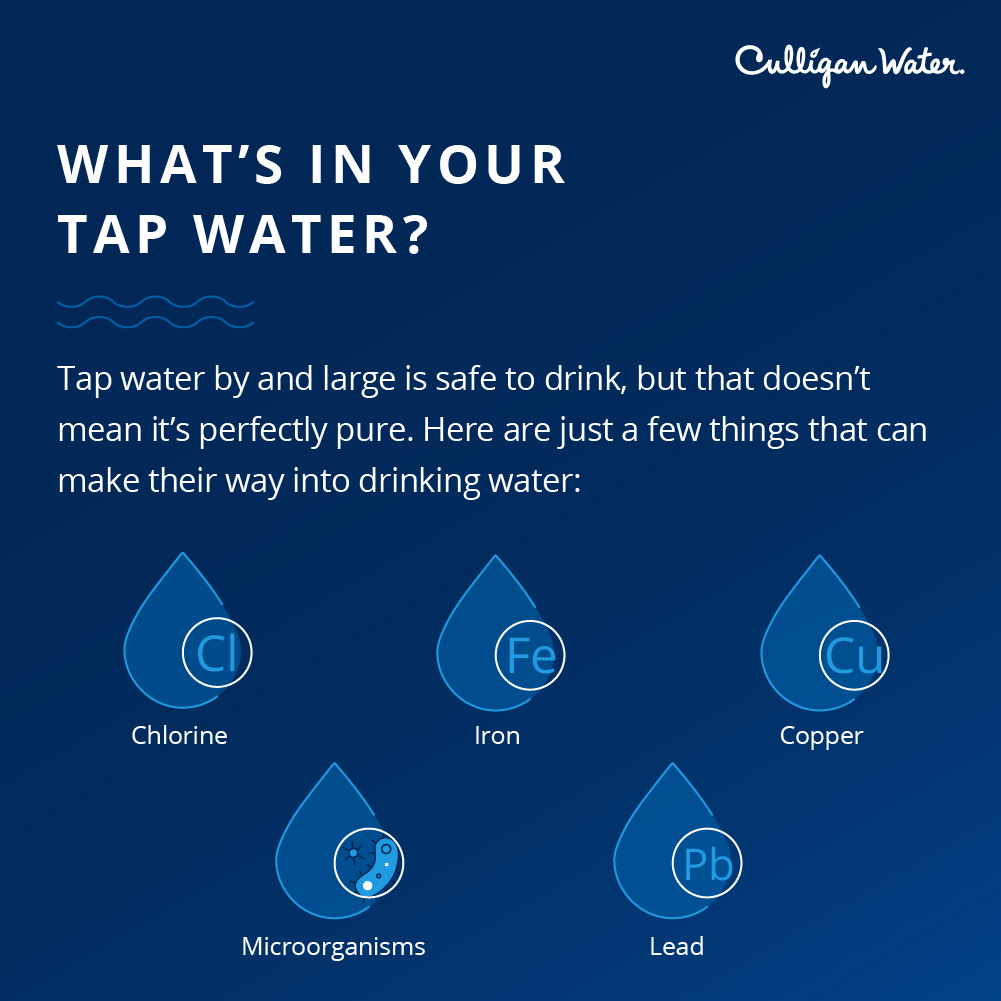 That’s why the U.S. Environmental Protection Agency (EPA) passed the Safe Drinking Water Act in 1974 and has amended it multiple times since. Every public water system in the U.S. must follow EPA regulations; many of these systems use water treatment solutions such as chlorine to kill bacteria and viruses.

The same is true in Canada, where the Guidelines for Canadian Drinking Water Quality set maximum acceptable concentrations of different contaminant types. Public water systems in the U.S. and Canada are required to produce annual water quality reports that can give consumers served by those systems more insight into what’s in their water.

But not every home’s water goes through publicly provided water treatment. For example, if you own a private well, you’re responsible for your own water quality — and you won’t get that helpful water quality report.

Is Treated Water the Same as Pure Water?

Private well owners might be thinking they got the short end of the stick. Is municipal drinking water the only pure water out there?

The truth is that water isn’t generally “pure” even after municipal water treatment. For example, even “clean water” might contain chlorine — and while chlorine water is safe to drink, it can still create unpleasant odors or tastes. Additionally, there are emerging contaminants not yet included in municipal drinking water safety standards.

The presence of chlorine in tap water is generally exclusive to city water, as wells don’t go through water treatment with this disinfectant. However, well water may contain contaminants such as lead or arsenic.

Furthermore, even water treatment can’t change the things your water comes into contact with en route to your glass as it travels through your home’s pipes. These could include lead, copper and other non-desirable components.

Is Tap Water Safe to Drink?

The good news is that tap water is usually safe to drink. For example, among Americans supplied by community water systems, over 92% receive drinking water that is considered safe at all times.

Most North American households’ water quality issues  have to do with odor, taste and color–concerns that affect enjoyment but not safety. But appearance and flavor issues might prompt you to drink less water than you otherwise might, hampering your hydration efforts. And issues such as water hardness can cause trouble for your home even if they don’t impact your or your family’s health.

The key takeaway: It’s vital to know exactly what’s in your tap water.

What to Know About Drinking-Water Contaminants

You could spend all day researching water contaminant types and still end up confused. There’s a lot to know about this topic, but let’s focus on a few things to keep in mind about drinking water contamination and quality:

Can You Detect Every Contaminant?

Some contaminants are easy to identify — like chlorine, which generally has that familiar swimming-pool smell. Others, however, are invisible to the senses. For example, you wouldn’t be able to smell, taste or see lead in your drinking water. For this reason, if there are lead concerns in your area, it’s important to have a professional water test and consultation, which can uncover what might be hiding in your tap water.

How Often Should You Have a Water Test?

Water tests are recommended generally at least once a year, whether you use city or private well water. That being said, you should test more frequently if there are known issues in your area or – in the case of well water – after certain events, such as a natural disaster or wastewater system malfunction.

Is Your Water Quality Similar to Your Neighbor’s?

Let’s say that your neighbor just had a water test completed and it suggested no issues of immediate concern. Does that mean the same can be said for your home’s water?

A water test can still tell you surprising things. Let’s take a closer look at common water problems and what they mean for your water quality:

Too much calcium and magnesium can lead to water hardness. Hard water doesn’t have a different odor, taste or color and doesn’t pose a significant threat to your health. However, it can cause a host of irritations, including:

If your water smells like rotten eggs, you might have a problem with sulfur bacteria. When the bacteria feed on naturally occurring sulfate, the result is hydrogen sulfide. This is especially common in well water and can also lead to unpleasant tastes and colors.

Your body needs a certain amount of iron, but too much can be a problem. That’s especially true when it comes to your water. Iron water contamination can cause yellowing teeth, metallic tastes, clogged pumps and even rust stains on fixtures and sinks.

Unlike other contaminant types, lead can be a risk to human health. Unfortunately, lead water contamination is difficult to detect without a water test. Tasteless, odorless and invisible, lead doesn’t even leave stains to indicate its presence as iron and hard water do.

Like iron, your body needs copper to keep you healthy. Overexposure to copper, however, can cause gastrointestinal discomfort and may even lead to problems like liver damage. Copper can also give your water a metallic taste and might leave characteristic green stains on fixtures, toilets and other parts of your home.

Remember, chlorine is used in many water treatment facilities, which means it’s not necessarily a contaminant. However, chlorine water can lead to issues like unpleasant odors and tastes. Chlorine can also occasionally interact with your plumbing and cause copper, lead or other contaminants to leach into your tap water.

In large, sustained quantities, this additive can also cause eye and nose irritation as well as chronic stomach upset. Chlorine’s chemical neighbor, chlorine dioxide, which is used to treat and control microbes, has been known to cause anemia in infants and certain nervous system effects.

Chromium is a mineral found in nature as well as many human-made products. Like lead, it’s difficult to detect and may have negative health effects at high intake levels.

PFAS are also known as per-and polyfluorinated substances or, perhaps more memorably, “forever chemicals.” They earned this nickname because they break down slowly both in the environment and in your body. Unfortunately, PFAS are more dangerous than previously thought; it turns out that these compounds pose risks even at undetectable amounts. Health effects could include:

Both the EPA and Canadian Drinking Water Guidelines have set low thresholds for “safe” levels of PFAS. Even if these regulations help protect your municipal water supply, though, it’s still important to have regular water tests performed.

When we think of odorless and tasteless contaminants, microorganisms are among the more obvious offenders, as they can go relatively undetected in water and cause pretty major problems. Common microorganisms like cryptosporidium and giardia, and perhaps the less common legionella, can all pass a sniff or taste test — but they still cause severe stomach upset and potentially pneumonia.

Arsenic falls into this category, as well as other offenders such as fluoride and asbestos. Some, including arsenic and asbestos, can create immediate health problems and irritations.

Mercury and nitrates also make the list of hard-to-detect chemicals, given that they can generally pass undetected in water. The only way to identify them is a water test.

To know more about what’s happening when you turn on the tap — and why your water might be causing spotty dishes, copper stains, odd odors and other issues — you need to understand what’s in your water.

Are you ready to become your home’s tap-water expert? The first step is to schedule a free, in-home water test and consultation, so schedule your test today.

*Contaminants may not necessarily be present in your water.

7 Things To Know About How Well Water Works

7 Things To Know About How Well Water Works 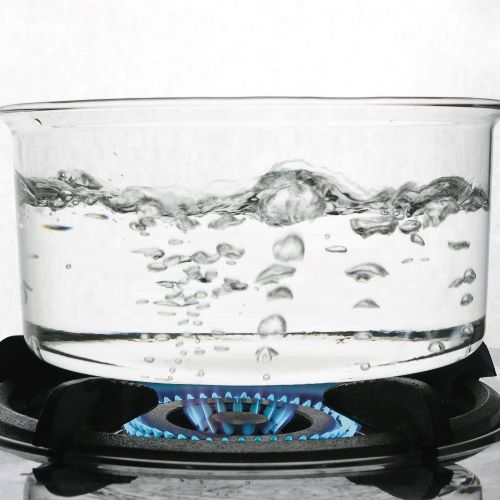 When is boiled water the best option? 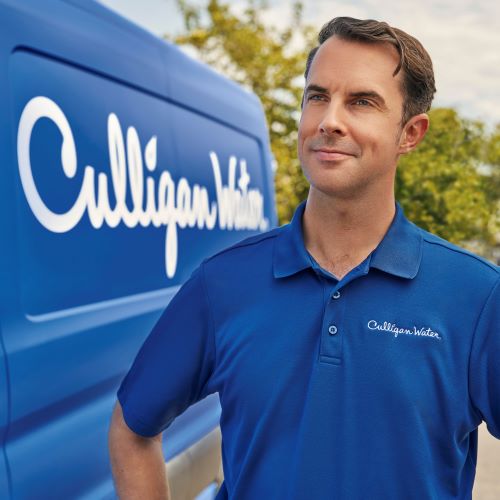 Watch Just How Obsessed We are With Water in Culligan’s Latest Comme...

Here at Culligan, we think about your water – so you don’t have to.